Ukie Get Smart About P.L.A.Y Campaign 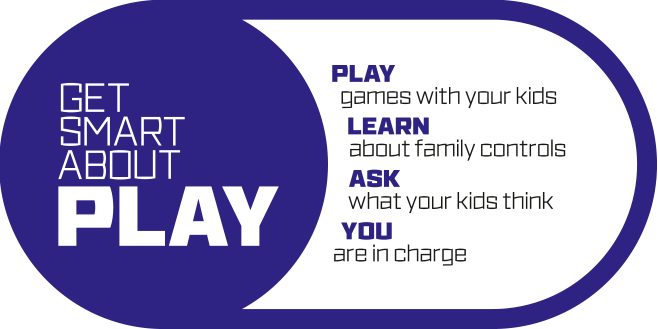 After recent research found that a tiny 19% of parents with children between the ages of five and fifteen use parental controls on internet-connected devices, Ukie launched the Get Smart About P.L.A.Y campaign on the 10th of January.

The initiative aims to encourage parents to make use of console tools that allow management of screen time and in-game spending. Considering the results from a YouGov poll which recently found that over 50% of parents were concerned about the amount of time their children spend playing games, it seems that this initiative has come at the perfect time!

The main premise of the Get Smart About P.L.A.Y initiative revolves around this easy four-step process:

A ask your kids what they think about the ground rules, so you can discuss them before setting them

“You wouldn’t give your child a bike without providing a helmet and stabilisers. The same can be said for videogame consoles and parental controls”

Learning about family controls can seem tricky, but this handy article by Ask About Games provides step-by-step instructions for setting up parental controls on several platforms such as Xbox One, PlayStation 4, Nintendo Switch, and more – as well as some older consoles including PSP and Wii.

If this quick summary has you intrigued, there are a ton of resources on both Ukie and Ask About Games to give you more information and advice about getting smart about play.

There are several handy articles provided by Ask About Games that give a quick rundown of a few games that are popular right now, and how to approach conversations about them with your kids. These include FIFA 20, Apex Legends 16+, Call of Duty: Black Ops 4 and Overwatch.

These resources include videos on each game, an overview of the game and it’s genre, the PEGI rating of the game (age-appropriate rating), as well as the themes and difficulty of the games – which are great for finding out a bit more about what your child wants to spend their time on!

The Ask About Games website also recently posted an article depicting an interview with Emma Kenny, a psychologist to get her views on Parental Controls – which makes for a really interesting read!

You can also find links to some super helpful resources such as PEGI ratings, safe and healthy online gaming, some FAQs about gaming and the Top Family Video Games chart for 2020!

Some of the best games are the ones that you just can’t pull yourself away from. It can start as “I’ll just sit down and play for a bit” and next it’s 3am in the morning and you have to be up early for work. Check out Andy's top "Just One More" games!

Two years ago, we decided it was time we started giving back to our planet. Our solution was to partner with Ecologi to reduce our environmental impact and bring about positive change for the environment. Keep reading to find out what we've achieved in the past two years with Ecologi.

SpecialEffect’s One Special Day is always a big day in the games industry, and as it was an extra special year for SpecialEffect, their 15th anniversary, we wanted to do something extra to commemorate the occasion and raise as much money as possible towards this very worthy cause.

At Skillsearch we’re committed to providing a diverse and inclusive range of candidates for all of our clients and roles – in order to improve this experience for candidates and in turn clients, we partnered with Get-Optimal in June of this year.