And the Winners are..! 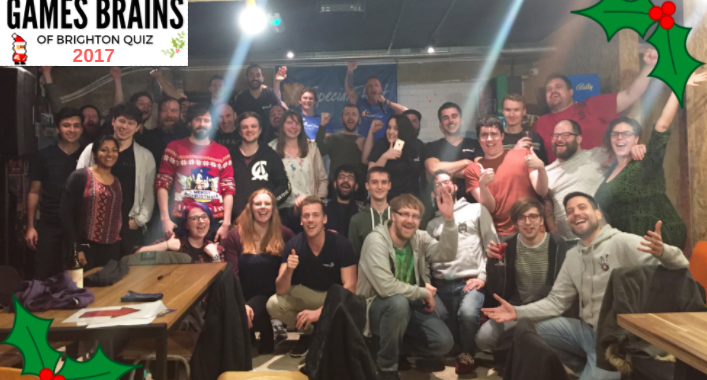 Firstly on behalf of ourselves at Skillsearch and our friends at Special Effect we would like to say a massive thank you to everybody that took part in the third edition of our Games Brains of Brighton Quiz.

On the lead up to kick off, Joe and I were more nervous than ever... Joe, because the reputation of the quiz depended on the questions he had written, as well as the introduction of never seen before rounds, such as the invention of our new 'game character face merge' picture round... Me, because I have an inability to read basic questions from a sheet without laughing, interrupting myself to make a bad joke or tripping over.

The night was a huge success, raising more than ever at a generous £465.85!

A big shout out goes to our venue hosts, the awesome (and brand new) C:\ Side Quest bar in Brighton. Not only did they accommodate us in style in their great space packed with board/video/arcade games galore - rendering us the second most fun reason to be there that night - but also they declared that they were donating 20% of Skillsearch's bar tab to our fundraising figures too! Double thumbs up guys!

Safe to say that despite my maverick style of skewing most things up, Joe's fire fighting was on point (as usual), keeping things vaguely on track and the quiz was an absolute blast.

Team Skillsearch's annual wooden spoon had already been declared and as we moved up the list it came down to HALF A POINT between first and second place! Would this year's debutantes Creative Assembly come straight in for the win, or would it be the reigning champions Wish Studios that would be taking the champers and their secondtrophy home in as many years. This baby right here:

And the winners are... WISH STUDIOS!!

Safe to say the champagne was very quickly opened and made good work of - it's Christmas, after all ;)

Thanks for an excellent night all, Special Effect are incredibly appreciative of everybody's generosity and have asked us to pass on their gratitude. For more information about the amazing work they have been doing recently, just follow the link: https://www.specialeffect.org.uk/

It's goodbye from us for another year - Merry Christmas all!

We’ve been working hard over the past few months to put some exciting changes in place so we’re extremely proud to be able to say that Skillsearch’s majority shareholder is now its employees!

Skillsearch and Ecologi - A referral scheme to save the planet

Learn more about the new scheme where Skillsearch will donate £250 worth of Ecologi trees on your behalf.

Best of Brighton: A Brightonians Guide to Eating & Drinking at Develop (July 2022 Edition)

As the cream of the Games Industry heads to our home City to Develop: Conference, we share our top tips for the perfect stay in Brighton...

Researching your Relocation in Games

Thinking about relocating for your next job in Games? Here's our guide to what to consider ahead of making that step.

Calling all final year female students looking to get into Games... To celebrate International Women's Day 2020 we're offering a CV & Portfolio review service throughout the month of March!